I recently saw a well-known chef whose work I really admire, make Spanish Rice the wrong way. Now why do I say wrong? Because the first and most important thing about making Spanish Rice is you’ve got to toast the rice. Even more than talking about ingredients this one preparation technique is what gives Spanish Rice its distinctive depth of flavor. Furthermore, by toasting the rice, you’re locking the grain i.e. making it more durable and much less prone to breakage. Without it, you’re prone to oversaturate the rice once you add all those juicy vegetables into the pot, causing them to get water-logged and break and yielding a mushy, not-too-appetizing texture.

So toast! Doing it is as easy as 1-2-3. I’ll be posting my recipe for Spanish Rice a bit further down in case you want to refer to that. 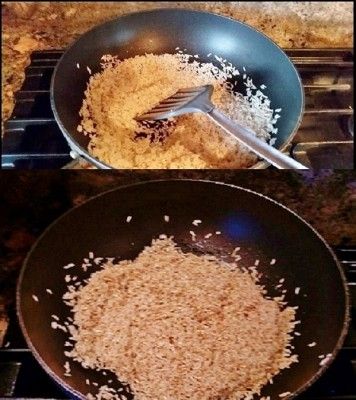 1–Heat up your pan on medium high heat. Add two tablespoon unrefined olive oil. It’s important to use unrefined olive oil since it has a much higher smoking point than the refined stuff. Trader Joes sells theirs for five or six bucks.

2–Once the oil is hot, add rice and move it around, trying to coat as much of it as possible with the oil.

3–Constantly turn the rice. Do not let any grains sit in one place for long which will cause them to burn. Burning even one grain can cause the whole pot to taste burned so use that spatula to keep turning those grains! You’re looking for an nice, nutty color and smell. When done toasting some grains will be darker in color than others. That’s fine.

Now that We’re Nice and Toasted…

So we’re clear here, there’s if you were to go to Spain and ask for “Spanish Rice” or “Arroz Espagnol” and the Spaniards are bound to look at you a little strangely. They call it rice, “arroz.” It’s just the way it’s done and their versions are usually plainer than what we commonly call “Spanish Rice” in the States which contains some tomato or tomato sauce, onions, bell peppers, etc. In Spain, the rice you get on the plate will be toasted, cooked with olive oil and/or butter, bay, garlic and sometimes onion. Then there are a ton of home-style rice dishes and paellas which closely resemble what we call “Spanish Rice.” So, yes there’s a link between the rice of Spain and the versions we enjoy today but let’s save that for our study of Spanish Foodways of the 1600s.

Once onions begin to look opaque, add two handfuls of tomatoes. Squash them through your finger and directly into the pot. Stir. allow to cook for 3-5 more minutes, stirring frequently.

Add bay leaf and stir well. Continue cooking for about one minute to allow bay to flavor the rice. Add broth.

Stop with all the stirring now and let it cook down without a lid until large craters form or as my mom likes to say, “Until it looks like the moon.” Once it’s boiled down to craters, cover and turn the heat down to medium-low. Cook for 15-20 minutes.

Uncover. Top with 2 tablespoons butter and salt to taste. Cumin will slant this dish more towards the Mexican style, while saffron will give it more of a Spanish appeal. Both spices are best used sparingly. Very sparingly. For barbeques and anything outdoorsy I’d opt a more Mexican take and add some quickly cooked corn and red chili pepper to the mix, maybe a few roasted jalapeños as long as everyone can handle the heat. For steak, anything with a French or Spanish feel, I’d stick to the recipe above, maybe adding a few pimentos or olives into the pot along with the vegetables.