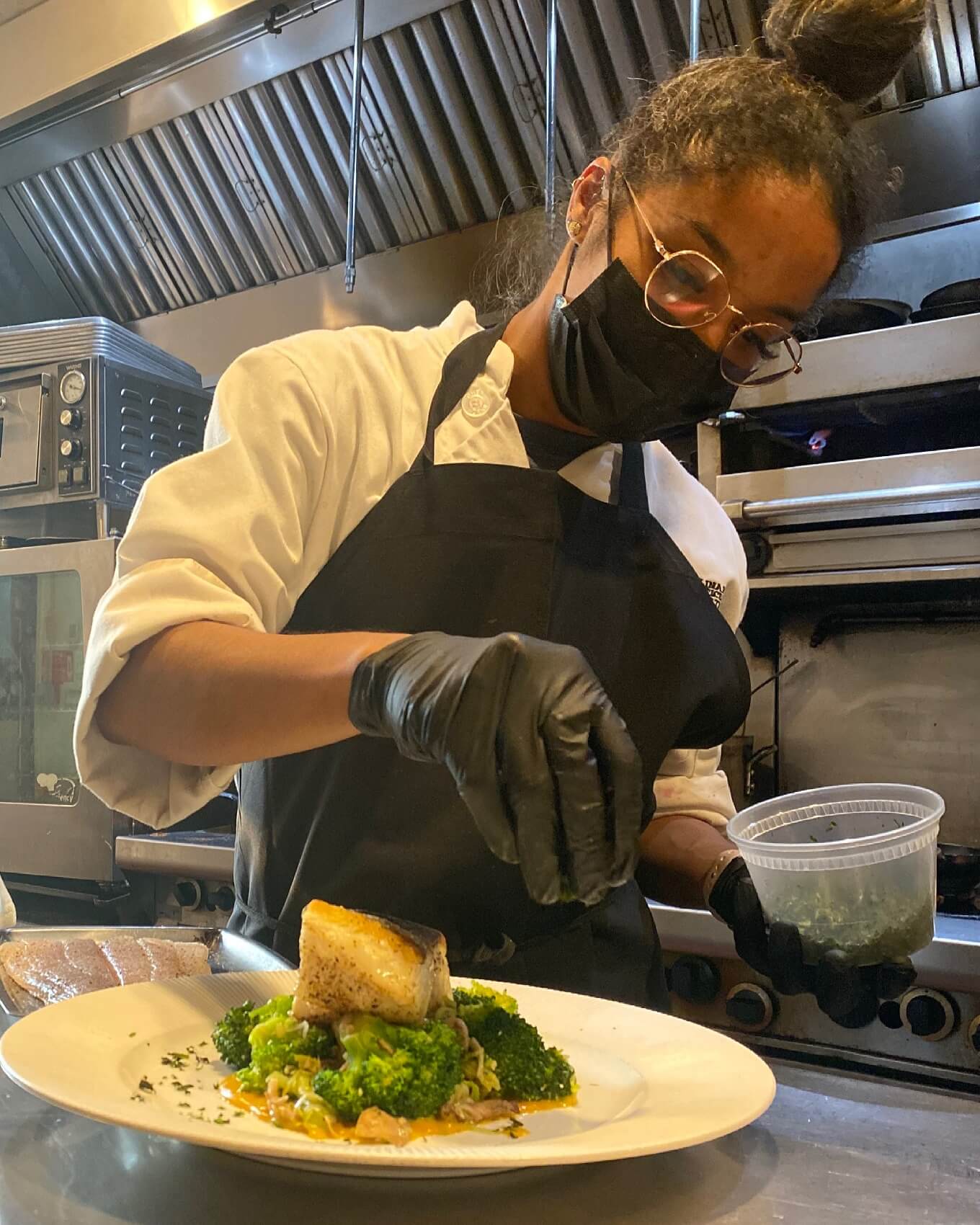 CASA graduate Josmira Batista on the line at Sandbar

CASA graduate Josmira Batista was on her way to becoming a nurse when she had the realization that nursing, as noble a career as it is, just wasn’t for her. Since then, Josmira’s love of food has grown, leading her to new awakenings and a whole new career path that’s full of promise, exploration, and discovery.

Before finding CASA and getting trained in the culinary arts, you were on the path to become a nurse. What led you from nursing to food?

“When you’re a little kid, you don’t think being a chef can help people. So, I went into nursing. And then I stuck with nursing because nurses help people. Doctors help people. Then I remember doing clinicals because I was doing a certified nursing assistant program, and I was like, ‘Yeah, this isn’t for me.’ Then I got my first job in a restaurant, an Italian restaurant…. I basically grew up there, from 17 to 25…. That’s when I started loving food more, and then I started traveling.

Then I went to Italy, Greece, Amsterdam, England, Jamaica [and] I immersed myself in the food. When I traveled, I would just book an Airbnb instead of a hotel to really become a local. And that’s when I really started falling in love with food and culture.”

You were matched with Chef Amanda Mathosian at Sandbar. How did that first meeting go?

“I knew I had to interview with someone. And interviews, obviously, make people nervous. So, I was really anxious and nervous…. And I remember [her] just walking in…. And, yeah, we just vibed from the first interview, like I really liked her, [and] I hoped she liked me…. I left there hoping that I did a good job…. I hoped that she [had] liked me enough to like choose me.”

When did you get word that Chef Mathosian wanted you to train with her?

“Literally that same day…. I was driving and I forgot who called me…. He told me what Chef Amanda thought about me. And I remember crying, like to myself, tears of joy…. The only thing that was stopping me was obviously finances but I was like, ‘You know what, if it was meant to be, it’s meant to be’ and I just went for it. I took out a loan and I was like, ‘I want to do it.’” Learn more about Josmira’s CASA experience and get her advice on how to make the most of CASA in our Straight Talk video below!

Did it take time for you to become accustomed to being a culinary extern at Sandbar? How did it feel to be a newbie in a professional kitchen environment?

“I thought I knew how to hold a knife right, but I guess I didn’t. And [Chef Mathosian] showed me how and I remember my wrist hurting from cutting so many vegetables. But I was like, ‘Okay, so this is what it’s going to be like.’ And ever since then, she would challenge me and just be like, ‘All right, we’re going to do this, this, this.’

And I remember the first few weeks I was just quite nervous because I was feeling everybody out, I didn’t know what to expect… Then I got more comfortable. [When I started], I didn’t know how to stand when cutting. I would lean to one side, [and] cross my legs and she [Chef] fixed that for me. Then I started catching it myself. So now, I’m much better with that too. She helped me improve in a lot, a lot of things…. I learned a lot, even like coming in and looking at the prep list and seeing what we had to do. I love that I knew what to do and how to make things, and [was always] writing things down in my little notebook of recipes…. And so… I became part of the team in a way, which was really cool to feel.” 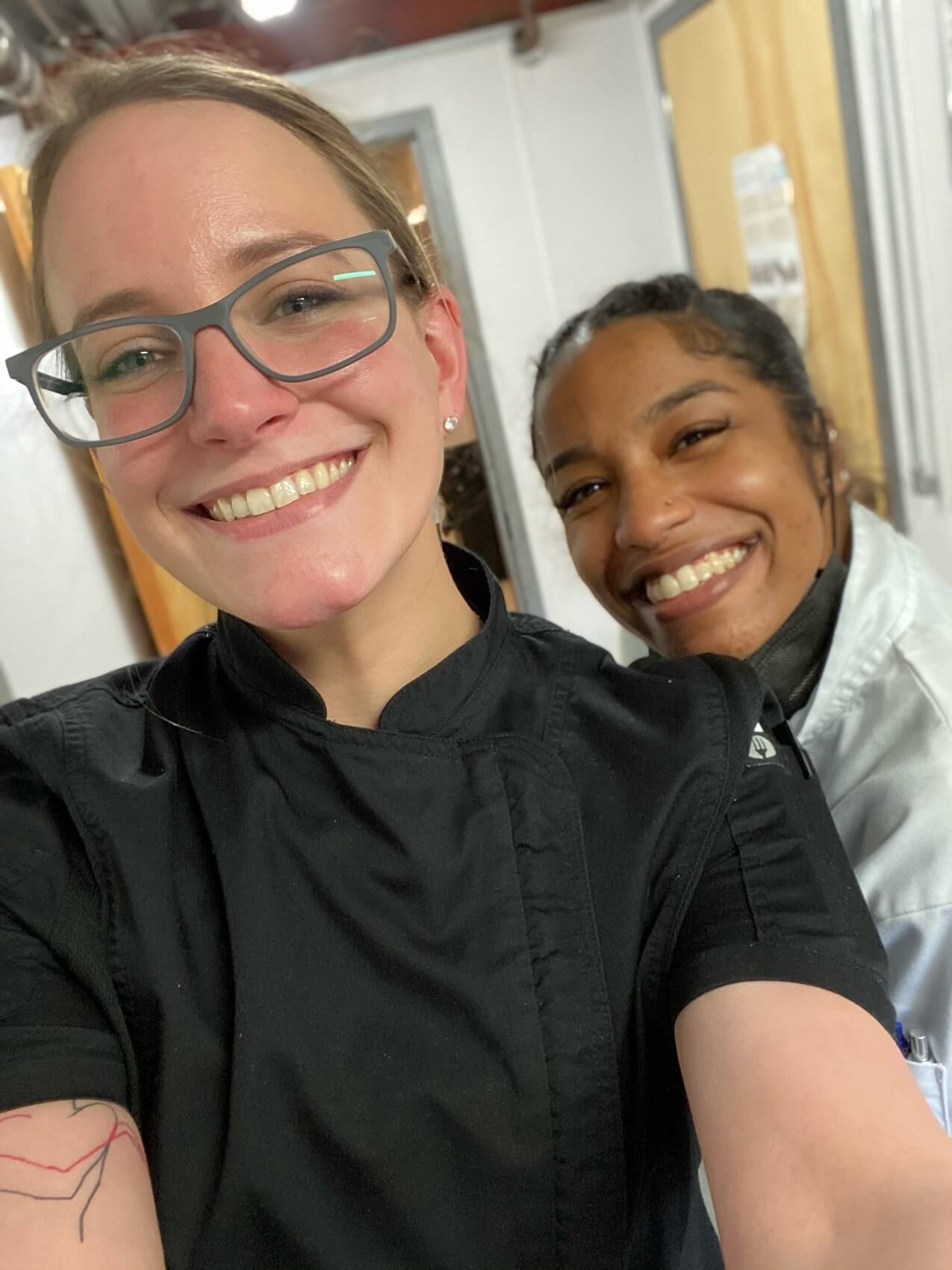 Then you really became part of the team, permanently! Give us the scoop on how you got hired.

“So, I had been working really hard, like so hard to prove to Chef Amanda that I had what it took to work there…. Months before she hired me… she asked me what I wanted to do… and I said, ‘I want to be in the kitchen either prepping or maybe eventually being on the line, but I want to be very versatile. Like, if you need me somewhere, I can work there. If you need me in another place, I can work there too.’ So, the day she spoke to me about hiring me, I remember telling the sous chef, it was a Friday, and I remember telling him, I was like, ‘Today is going to be a great day. I feel it in my bones,’ and he was like, ‘Oh, yeah?’ I’m like, ‘Yeah.’

And then hours later, Chef Amanda [said], ‘I’m going to need you in my office, like around this time.’ … Then she brought me in the office, and told me… ‘You’ve become such an asset to the team… how would you feel if you picked up some hours?’ I was just really excited because I wasn’t expecting to get hired. I really wasn’t. I didn’t see it coming… I was just so speechless because it felt like my hard work really did pay off.”

You’ve also started working on your own food blog. What’s it about?

It’s called “A Twist in Thyme” with thyme spelled like the herb…. I first started posting about my days in school [CASA]. Now to see where I was and then and where I am now, it’s kind of funny… because now I have more confidence. Before, I would stress and be like, ‘Oh my god, I did this wrong.’ Now… I’m more like, ‘Nah, you got this girl. You can do it.’

Learn more about CASA Schools, for Chef-led training in the culinary arts in months, not years, and for thousands less!

Josmira tells us about her 1st meeting with her future mentor, growing with CASA & getting hired at Sandbar. 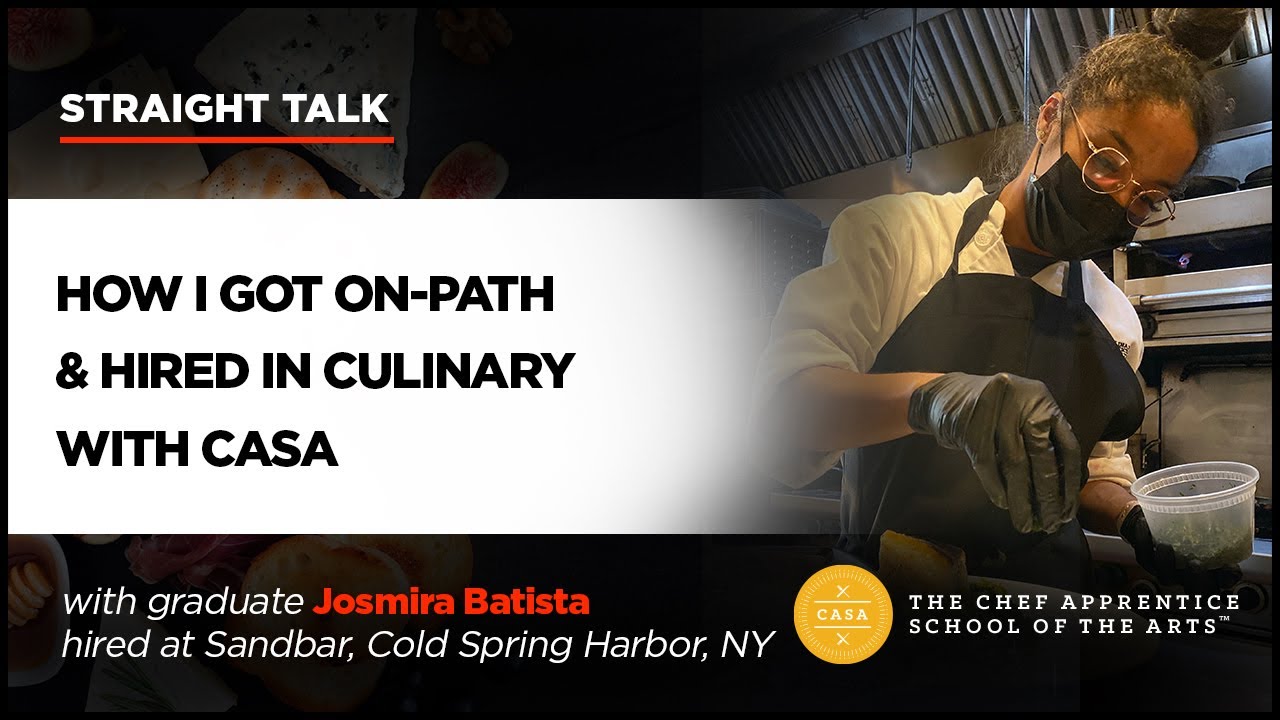