In 2014 after having made a number of highly successful big budget films including Iron Man, Cowboys and Aliens, and Iron Man 2, actor/writer/director Jon Favreau decided to mix things up and make something smaller, something closer to the independent spirit of some of his older films. Where would that pursuit take him? Ultimately right into the food truck world of Los Angeles. After considerable deliberation, Favreau ended up helming Chef i.e. writing, directing, starring and producing in the film. In other words, he went indie all the way with one major exception—he used an all-star cast, including the chef.

Co-producer was none other than one of the premier food truck chefs of L.A., Chef Roy Choi. Edgy and smart, Choi first splashed on the scene selling tacos made of Korean short ribs with Choi’s own salsa roja and a chili soy coleslaw—Mexican-Korean fusion. Kogi food truck was born and to Angelinos it just seemed obvious, someone should have done it much sooner but there it was, and it was good! Now involved with more than six restaurants and a fleet of Kogi food trucks, Choi has basically achieved rock star status. Film was naturally his next foray.

The layer of authenticity seen throughout Chef is something Favreau credits Choi for bringing to the project. Choi personally oversaw all the food prepared in the film and many of the trucks in the movie belong to Choi’s company.  However,  the presence of food trucks in Los Angeles is not a new phenomenon, not by any stretch of the imagination. Food trucks have been a constant in L.A.’s late night food culture a least the past few decades. Burrito and taco trucks take up nightly residence, peppering busy intersections throughout the metropolis. After a night on the town they’re always the one place you can get a late night snack. Roy Choi is one of the luminaries behind the “gourmet food truck movement” though something tells me that’s a phrase he’d bristle at. But no one can deny that the food truck culture in L.A. is nothing like ten years ago and Choi got the ball rolling. Where once the idea of a food truck on Abbot Kinney would have been unthinkable,  now it’s commonplace, expected. Go to any outdoor festival and expect to see a number of food trucks, manned by established veterans and young upstarts wanting to make a name for themselves. It’s a smart approach too. With lower overhead, a chef can experiment without the same restrictive bonds of a high overhead and eaters expect something different from a six dollar taco than a hundred dollar meal. Innovation and high-brow, low-brow mixing is the name of this culinary game. Look at it this way and the partnership between Favreau and Choiseems only logical and correct. 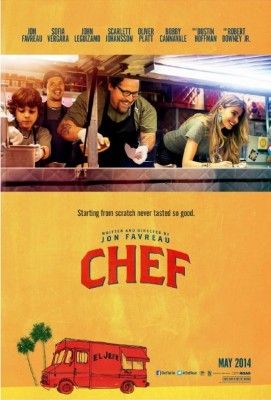 Although Chef may be a bit predictable in its plot line, the film’s portrayal of a chef’s decision to leave fine dining to create fun, innovative and accessible food, rings true in spirit and tone. It celebrates getting back to basics, much in the same way Favreau’s indie approach was about getting back to basics in filmmaking. Chef encapsulates what the gourmet food truck culture is all about, lest it take itself too seriously. And it’s entertaining and funny, and yes there’s a love story and yes, they get back together . Perhaps the advent of this movie, like so many other things, tells us the bloom is off the rose. Alas, food trucks probably aren’t as cool and indie as they were a year ago but heck they’re practical and if the food is good, and much of it is very, very good, then they’re bound to stick around, peppering the pavement for another twenty years.