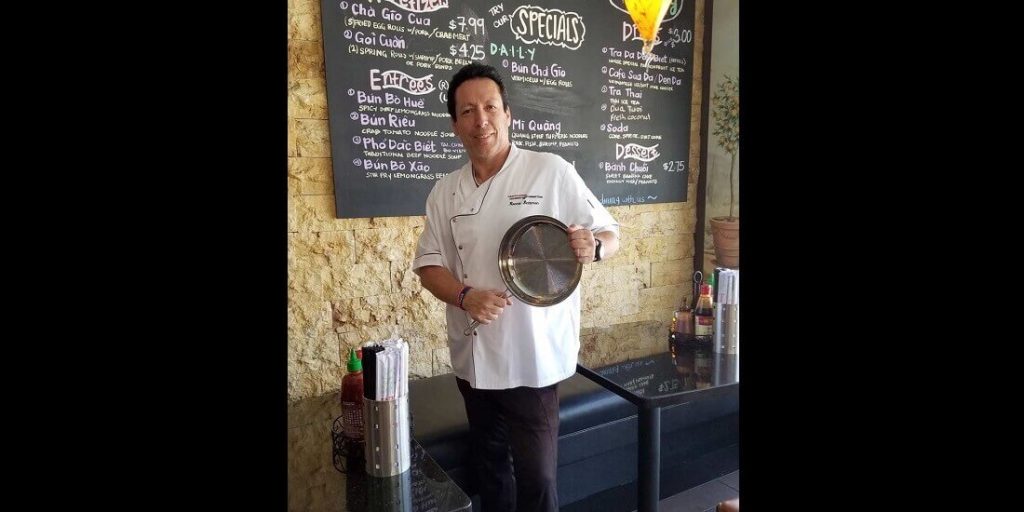 From all outward appearances, Ronnie had it made: a wife, a family, and a successful career as the regional director for a major resort company. But something was missing.
[break side=”left”] “Throughout my family line, from my great, great, great grandfather on down, all the men were the cooks in the family,” says Ronnie Dettman, who recently graduated from CASA The Chef Apprentice School of the Arts. “And so I always dabbled and I always did a lot of the cooking at home, and I really loved it; but it was just a hobby. I never thought about it as a profession.”
[break side=”left”] Ronnie remembers the exact time that changed for him: namely, 5:45 a.m.
[break side=”left”] “I was making a lot of money, but you know what? It doesn’t matter how much money you make,” he says. “If you’re not happy, you don’t care what you’re doing, even though you’re good at it. So one night, I was watching Food Network…I said to myself, ‘Why am I doing this?’ I said, ‘God, I want to do that.’ So I was up the next morning, and the exact time was 5:45. I woke up, I shook my wife at 5:45 in the morning. (I’m lucky I’m still alive to tell this story.) But I said, ‘Babe, you know what? I want to be a chef. I want to go to culinary school.’ And she’s half awake, she flinched and said, ‘Oh my God, wow. Oh, that’s great…Yeah, go for it.’”
[break side=”left”] Ronnie leaped out of bed, started researching culinary schools, and came across CASA. “I really liked the curriculum, the way it’s set up,” he says. “You’re put into a kitchen right away… and you learn more actually doing it in the kitchen than if you’re in the classroom.”
[break] Ronnie applied to the program, and was paired with Chef Ken Takayama at Mélisse in Santa Monica, California, one of the most lauded fine dining restaurants in the Los Angeles area. Ronnie recalls how quickly he was thrown into the middle of things—literally the day of his initial interview.
[break side=”left”] “I met Chef Ken, I sat down with him, I spoke with him for about 20 minutes, half an hour,” says Ronnie. “He asked me a lot of questions. He said, ‘Okay, why don’t you go down there and we’ll see how you do. Spend a day over here.’ I was not planning on spending the day. I was planning on just the interview, and then go on, and later on they’re going to give me a schedule. But he wanted to see how I liked it. He put me right on the front lines right away…I really worked hard that day, like I do every day. But that was the first day I did that, and he said, ‘You sure this is what you want to do?’ I said, ‘Oh, absolutely.’ He says, ‘Great. Okay, we’ll make a schedule now, and then we went over the dates he wanted me to come.”
[break]

Since going through the program, Ronnie marvels at how much his skills have improved. “The meals that I was cooking before, it wasn’t any big deal when I made something,” he says. “It was just okay, and I was just waiting and hoped people would say good things about it. Now…they’re really shocked at how good the food is because of the techniques I’m using.”
[break side=”left”] He’s more personally fulfilled, too, which he says is even affecting his family life. “I’ll be honest with you, I’m better with my family now,” he says. “It’s not that I wasn’t good with my family at all before, because I have a great relationship with my family, [but] we’re so much closer now. It’s true, food does bring you closer.”
[break side=”left”] As for what comes next…Ronnie is dreaming big.
[break] “I’m looking to purchase one or two food trucks, get that started,” he says, “and actually while that’s running, I’m going to look for a standalone place for a bakery cafe or a small restaurant…I want to really simplify it and make it as simple as I can, but at the same time, make it just a little bit upscale, not too much. And then, hopefully with a friend of mine, we’ll pull together a franchise program and just franchise it out…I’m a business guy, and I really think this is something that can be huge. It will make a lot of money, but the thing is this: I’ll be giving people great food and they’ll be happy. Putting smiles on people’s faces, that’s important to me.”
[break] For Ronnie, in a very real way, attending CASA was more than just learning new skills or refining his existing skills: it has played a huge role in changing his life so he can focus on what he loves. “I give this a 10 out of 10 because it goes beyond the teaching level,” he says. “There’s a human level that you guys do that’s beyond the teaching level. I believe you really do care about what happens to everybody and about people succeeding. And not everybody does that…I would have spent whatever it took to get me this education.”
[break] [media href=”https://www.youtube.com/watch?v=_WBJRVvd3WM”] Learn more about CASA’s approach to culinary training in professional kitchens, not overpriced culinary schools. Get going in 6-9 months.[/media]