In a recent blog post, Kenji Alt Lopez hit the nail on the head when he said, “Bay leaf, by its very nature, plays second fiddle to other, more prominent flavors.” Basically, you might not notice it when it’s there but you’ll most definitely miss it when it’s gone. When it comes to any kind of pot stew, marinara, or casserole or even most chicken dishes, I’ll instinctively throw in the bay leaf and when it’s not there, there’s just less subtle complexity to the flavor. And try cooking Filipino Adobo without those 1-2 leaves and the dish just falls flat. Sure it’s a good-enough-tasting mixture of vinegar, soy, and garlic but there’s just nothing to occupy those middle notes.

So it got me thinking, I’ve been using bay leaves ever since I started cooking, at twelve or thirteen, yet I really didn’t know much else. Turns out, there’s quite a bit to know!

Bay leaves also contain a number of enzymes that aid in breaking down certain proteins in beans and meat, making them easier to digest and reducing the gas-inducing effects of beans, so definitely add bay to that bean pot!

Laurel This, Bay That

Ever wonder why “laurel” pops up in academia so often? It all goes back to those Ancient Greeks who lauded their scholars and poets with wreaths of laurel. Now why bay? Well, it all goes back to Apollo chasing after the nymph Daphne, whose father turned her into a Bay laurel tree to save her from the god’s advances. Some say giving the bay laurel wreaths and berries to scholars was a way to commemorate their commitment to a chaste or un-worldly lifestyle. Others say it signifies the Daphne herself who chose the woods over love, and hence signifies a philosophic and wandering i.e. “searching” life. Then, of course, didn’t we learn in ninth grade history that the bay laurels signified peace, wisdom, and protection? Predating the Greeks, Ancient Egyptian medicine men used the herb as an aide to help them divine the future. Now was the Egyptian belief somehow appropriated by the Greeks? Who’s to say? Anyone?

The aromatic properties of bay leaf are quite similar to eucalyptus. Made into a compress, it can help alleviate a chest cold and may also help induce sweat and as mom says, “break a fever.” The presence of Linalool is also believed to be good at reducing stress and boosting the immune system.

In 2009 the Journal of Clinical Biochemistry and Nutrition published the finding of a random, controlled study that looked at the effects of intake of bay leaves on type 2 diabetes.  Participants who consumed 1 to 3 grams of crushed, dried bay leaves for thirty days saw a decrease in serum or blood glucose levels ranging from 21-26%, as well as significant drops in LDL and triglycerides roughly within the 20-35% range. High density lipoprotein (HDL or “good cholesterol”) increased 29-20% in the groups receiving 1 and 2 g of bay leaves, respectively.*

Aside from that, the aromatic properties of bay leaf are quite similar to eucalyptus. Made into a compress, it can help alleviate a chest cold and may also help induce sweat and as mom says, “break a fever.” The presence of Linalool is also believed to be good at reducing stress and boosting the immune system.

Before you start crushing that bay leaf, do the research! The very same eugenol that’s present in bay leaves, yes the very same stuff dentist’s use for dental work, is also classified as hepatotoxic, meaning it may cause damage to the liver. The amount of eugenol in one or two bay leaves is nominal, since it takes many, many leaves to create the essential oil from which the eugenol is ultimately extracted (although cloves are what is generally used). That being said, one should be wary of over-consumption. 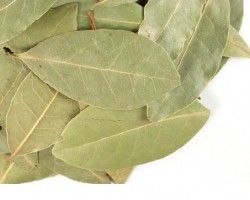 My mom always threw the bay leaf out after cooking. So did my aunt and my grandmother. Nevertheless, if I saw a remnant of it in the stew, beans, or marinara, I ate it and never felt the worse for it, even though the texture was always dry and remarkably like eating any dried up leaf out in the yard. It wasn’t until my cousin saw me eating on years later that I got a good smack on the head along with the words, “That’s poisonous!” Well my cousin was wrong. No, the common bay leaf is not poisonous. Nevertheless, throwing the whole leaves out after cooking is probably a good idea. That dry, insoluble texture of the bay leaf can actually wreak havoc on your digestive system and, in this rare case , even rupture part of the intestinal tract! So, yes, toss that floating bay leaf!

One last word of warning just in case you’re inclined to pick a leaf off that laurel in the backyard—don’t! Some say bay leaves are believed to be poisonous because they’re often confused with other laurel plants like Mountain Laurel which is poisonous. California and Oregon are actually home to their own, stronger variety called California Bay Laurel, Oregon Bay or Oregon Myrtlewood. This one variety that goes by several names, though edible, is considerably stronger in flavor. When substituting one of these for good old bay leaf, use one-half to one-quarter less.

On Bay as Aphrodisiac and Hallucinogenic

Sure bay leaves are an aphrodisiac if you’re going for the placebo effect. Although the Ancient Greeks are said to have used them as sexual stimulants there’s basically nothing out there to suggest this is true. Look at the health properties and you’ll see bay leaves have a significant amount of vitamin A which is critical for sex hormone production and reproductive function in both genders but that does not necessarily mean it promotes sexual arousal or interest. I’ve also heard it said that Ancient Greek priestesses chewed bay leaves in order to induce a hallucinogenic effect. Alas, nothing out there suggests this is possible. In fact, a number of the articles (sadly not a scientific or MD journal among them) say the ash and certain oils are not to be overused, so let’s just say, a little bay goes a long way!

Well, I hope you learned a thing or two about the unassuming, yet interesting and storied bay leaf! I know I sure did.

*Source for 2009 Study on Bay Leaves and Type 2 Diabetes: Journal of Clinical Biochemistry and Nutrition