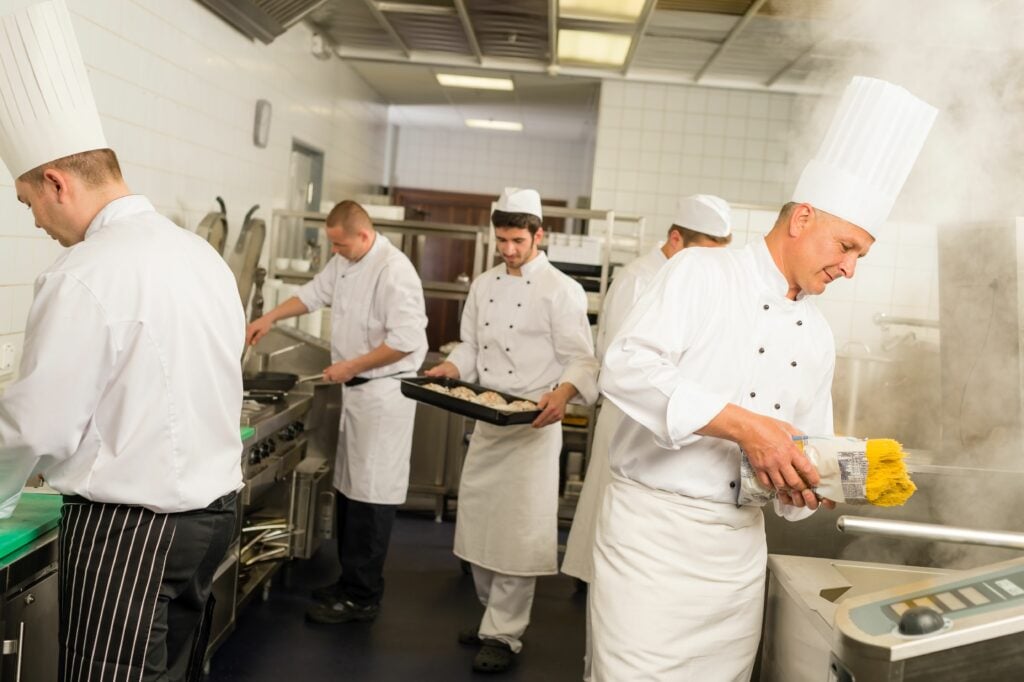 Whether you worked for the most influential chef in the middle of the twentieth century, Fernand Point, at La Pyramide, in Vienne, France or as chef at the Waldorf Astoria or The Plaza in New York during the early 1900s, or if you got in on the frontlines of nouvelle cuisine at Alice Waters’ restaurant, Chez Panisse, in Berkeley, California, in the 1970s, you would have worked from within the brigade de cuisine or kitchen brigade system. Whether we’re talking about The French Laundry by Thomas Keller or El Bulli by Ferran Adrià (the home of deconstructivist cuisine), the brigade system is used in the same or similarly intended way from one restaurant to the next.

Basically, once an order is received by the sous chef, the order is called out to the various departments. Each department is headed by a chef de partie who then oversees the preparation of the dishes which fall under their domain. A cuisinier or cook and a commis (junior cook) plus an apprenti (apprentice) will work under the chef de partie to prepare dishes to standard and on time. The objective: to have all dishes with various cooking and preparation times, plated and ready to be served at the same time. This means if there’s a cold gazpacho and a searing hot fish going to the same table, they’ll arrive at the correct temperature and at the same time. Doing this requires effective communication by the chefs de partie thus ensuring quality, consistency, accuracy and overall excellence.

The various chefs de partie are manning different domains specific to the dishes or preparation method under their jurisdiction. For instance, a rôtisseur (roast cook) manages the team (consisting of cuisine, commis and apprenti) that roasts, broils, and deep-fries dishes. The entremetier (entrée preparer) may also have a team of commis or demi-chefs under their jurisdiction as can the poissonnier (fish cook) or any larger station which needs more than one chef at the station.

On the upper end of the hierarchy, the chef de cuisine (means “chief of the kitchen”) is the one who supervises everything, usually communicating directly to the sous-chef de cuisine (or sous chef) who delegates the orders and serves as the representative and “right hand man” to the chief. Executive chefs, especially those with several restaurants under their charge, will have a chef de cuisine whom they have hired at each of their restaurants.

Over the past 8-10 years, some hotels and establishments have modified the classic brigade system, asking everyone to do a bit more due to the overall economic downturn. Other restaurants have always chosen to run with fewer chefs as is needed specific to the establishment. For instance, it may be perfectly acceptable for a restaurant in Biarritz which specializes in fish have both a poissonnier which literally means “fish cook” and a saucier (saucemaker/sauté cook) on the line. Smaller restaurants with differing needs may choose to have only a saucier on the line, preparing sauces as well as fish and meat entrees with perhaps a tourant who moves through the kitchen, assisting chefs with dishes as needed. Changeable and adaptable, the system Escoffier set in place in the nineteenth-century is still the foundation for organization of the kitchen staff and responsibilities.

Other changes to the classic brigade system have occurred due to technological advances. For instance, many restaurants now have P.O.S or “Point of Service” systems. Waiters input an order into a computer which disperses the orders directly to the various chefs de partie, usually with one copy coming to the sous-chef. Hence the need for an aboyeur, to call out the orders may no longer be necessary.

Advancement through the brigade system from apprenti to commis to cuisinier and upwards is dependent on experience, knowledge of the menu and talent or ability to execute tasks at a high level of consistency. Chefs can rise and fall based on their performance. Many chefs can rise through the ranks of the brigade system very quickly based on their abilities and dedication to master each level.

Great advice was offered to me years ago by one of my mentors, Michel Pieton at the Four Seasons hotel in Newport Beach. He told me a great chef de cuisine is one who can do everyone’s job in the kitchen as well, if not better than they can do themselves. Some chefs have the title of “chef de cuisine” but have not truly earned that title. If this is the case, the restaurant or hotel kitchen under their charge can never truly be successful. A great chef de cuisine must possess talent for performing all tasks in the kitchen, as well as managerial skills. Today’s chefs must also be able to operate at a high level while maintaining high regard for cost control, to provide a quality cuisine and also ensure profitability within the establishment.