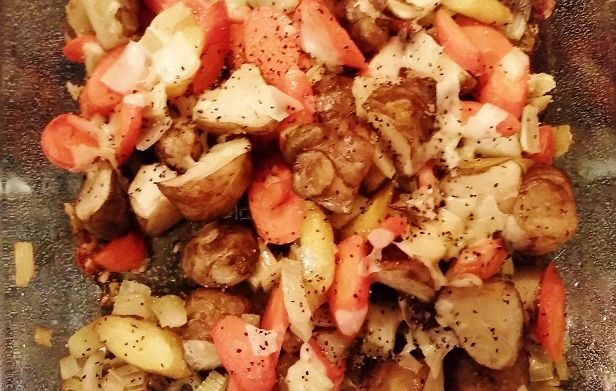 Seen sunchokes, otherwise known as Jerusalem artichokes, sunroots or earth apples and just don’t know what to with them?

Don’t know what on earth I’m talking about?

These knobby-looking vegetables that look a little like ginger. 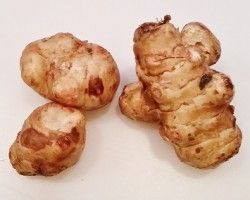 It will probably surprise you to learn that sunchokes were once very popular. Originally cultivated by Native Americans, Europeans first found the vegetable in the Americas in the early 1600s. Within decades, the sunchoke was a staple on tables throughout Germany, France, England and other European countries.

And considering sunchokes have more iron, over 40% RDA per 100 gram serving, it’s great that this near-forgotten vegetable is seeing a resurgence. Also an excellent source of potassium, soluble and insoluble fiber, electrolytes and other trace minerals, like copper, sunchokes are full of all the good stuff that can be hard to find in other vegetables.

Word is, combined with carotene, the vitamins in sunchokes thwart cancer-causing free radicals. Since carrots are full of beta carotene, we’re going to follow the doc’s advice and combine the two and throw in a little fennel for good measure.

Preheat oven to 350 degrees.
So just wash those sunchokes under running water. Scrape off any of the eyes and grooves that may have dirt lodged in their crevices. Then chop ’em up. I basically chop along the knobs, making for biggish chunks. For pieces that are less knobby, I just slice them in halves or quarters, about the same size as a quartered russet potato.

Place chopped sunchokes in a baking pan, drizzle with oil and toss to coat. Bake for 10 minutes. Dice fennel. Slice washed unpeeled carrots on the diagonal. Add fennel, carrots, and minced garlic to the sunchokes. Toss with a bit more olive oil and sprinkle salt. Bake for 20-25 minutes (you’ll probably smell the carrots). Remove from oven. Sprinkle with parmesan and pepper. Toss. Bake an additional 5 minutes. 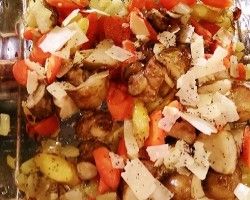 These roasted root veggies with fennel and parmesan are wonderful served alongside a nice dry rubbed steak or even a nice piece of halibut.

Enjoy and until next time…