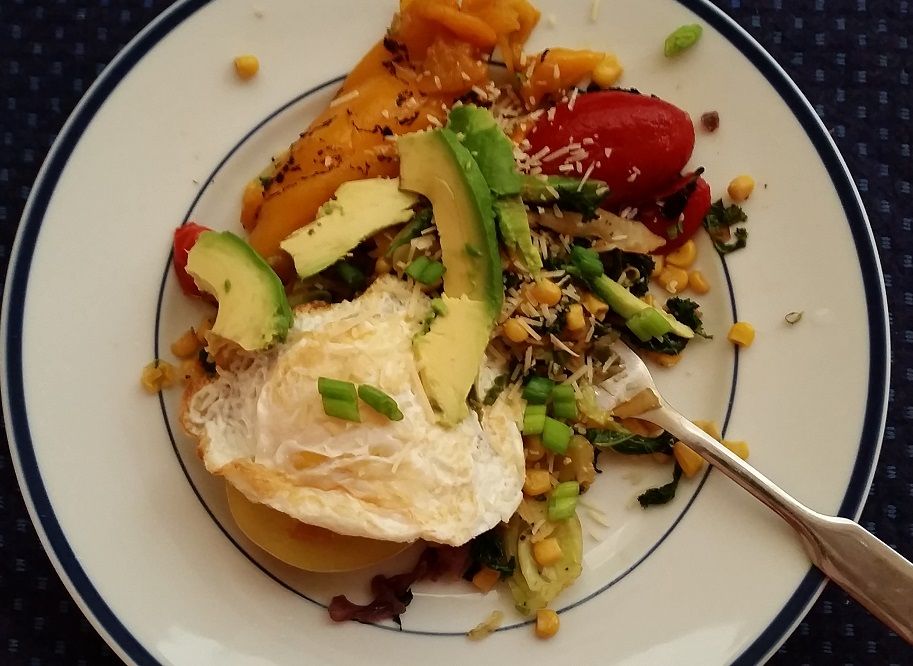 Want to make a genuine real Classic Caesar Salad? Put an egg on it!

Want to dress up that plate full of asparagus spears? Put an egg on it!

Want to make that burger truly decadent? Put an egg on it!

So we’re a full three years into the egg trend and dare I say it, it’s not letting up! So why oh why is the egg sticking around? Promoted from simple, unobtrusive, albeit comforting fare at the breakfast table, the once-humble egg is now the darling of chefs worldwide! I mean prior to 2009, who ever though eggs sous vide would be “a thing”?! Then there’s the egg slow bath popularized by chefs Wylie Dufresne and David Chang, et al. Eggs scrambled with truffles? Eggs stuffed with caviar?

So why oh why are eggs sticking around? Answer–because they work. People like eating them. There’s something very satisfying about an egg and when you add it to vegetable dishes the result is often a more complete dish. Those seared greens with garlic, olive oil and parmesan take on a new dimension when topped with a perfectly poached egg. The image of the egg with the corn, pepper avocado and all the other vegetables, well, I snapped that last Sunday when I made breakfast for my college buddies. We’d had a seriously late night full of dangerous cocktails and no one wanted to eat, much less cook. Now how did I get elected to be the one to don the apron? I guess writing about food for a living had something to do with it and so there I found myself half-awake in the kitchen with little more than a dozen eggs and a dream that my head would stop pounding. Fifteen minutes later breakfast was on the table. All I had to do was heat up a few leftover vegetables, add a few more, nuke a couple potatoes as a starch since there wasn’t any bread and voila–I was suddenly the master of the universe. Dare I say it, those potatoes topped with eggs was better than many Eggs Benedicts I’ve tried. Better yet, everyone sat and ate, completely contented with the meal, made better with the addition of Tapatio and some very good Kenyan coffee served with Columbian rock sugar. So yeah, eggs are easy and they’re pretty universally liked so that’s a big part of it’s enduring popularity.

Then there’s the way the egg lets chefs show off. See the egg is something even people who don’t cook know how to make. Being able to take something so familiar and make it sublime, well that makes the egg the perfect canvas to showcase culinary expertise. We can all appreciate a perfectly cooked steak but finding scrambled eggs sublimely rich, on par with the best custard while also full of depth, texture and flavor, well that makes you all the more aware that the chef really knows what they’re doing. We all know what the eggs we make for ourselves taste like but when you eat something that should be so simple and find it’s anything but, well you’ve just got to give the chef their due. Yup, the real pros know how to make the simple sublime and the egg gives them the opportunity for some of the best chefs out there to show just what they can do.

Then there’s the cold, hard fact that even organic, farm-raised, cage-free eggs cost but a fraction of what other proteins cost. That incentive speaks not only to chefs, restaurant managers but also to clientele. Cheaper entrees tend to outsell the more expensive dishes at most restaurants 2 to 1. While many of us have started going out more often than we did a year ago, people are still watching their wallets. Eating out is a luxury and while we may be doing more of it, we’re also a bit more conservative than in the past.

Cheap, readily available protein that’s also got choline for brain health and antioxidants for eye health (source), that makes eggs a favorite for many health enthusiasts, athletes and weight lifters.

Chances are the almighty egg will continue appearing on those dinner menus for awhile longer yet. That’s just fine with me. There’s nothing quite as versatile as the egg. Let’s just see where it takes us, shall we?