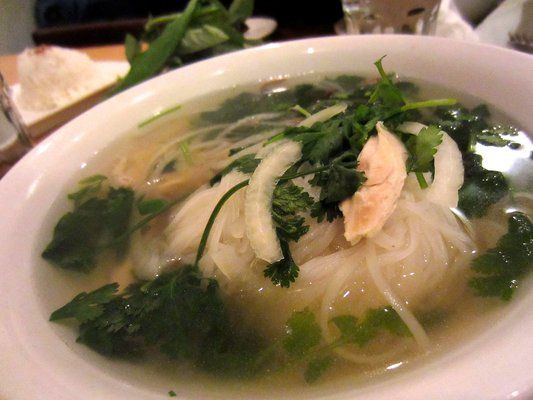 Well chefs have gone pho-crazy over the past few years. Sure pho is basically a long-standing go-by in LA among food-people and now “the masses” but who knew I’d find a decent pho in Brookline, Massachusetts (about 20 minutes outside of Boston) or in Portland, Maine for that matter? My cousin tells me she recently had some great nouveau-pho in Kansas City, Kansas! Who knew? Pho real? Rest assured, that’s my last silly pun for a while folks. Oh and while we’re on the subject, folks (mom) the correct pronunciation is just like the “FU” in a certain very well-known expletive. Yup, that’s the correct way to say it, not with an open “O” or “FO” sound but like you’re about to say that word.

So while everyone’s gone crazy for pho, adding their own signature this and that, I’d like to say please stop with the fennel, the duck eggs, the bouillon and just try the dish as it was intended to be. Sure there are definitely regional variations, a point my Viet housemate makes mentioning his mother’s version which contains ample lemongrass but no, let’s not stray too far and forget the green, fresh simplicity that makes pho so great!

So how does one make traditional pho?
I really like the chicken so that’s what I’m going with but just follow the recipe and use whatever meat you decide on. I trust you can season it with a little soy, garlic and other Asian-themed spices. The fixings that you toss on top just before diving in, well, you’re going to have to go to an Asian supermarket for hat stuff. Some of them even have pho fixings already prepared and packaged in neat little bundles. If there’s no Asian grocery in your town (boo-hoo), go with green onions, cilantro and basil.
Classic Pho Ga for Pho-ck’s Sake!

It’s better to wash and dry all the various wonderful herbs before you get swamped making the broth (mise en place people!). To be honest, making pho can be pretty taxing but well worth it the first time around. Once you do it once it’s a whole lot easier. Also, set an alarm to remind yourself to prepare your banh pho noodles. If you’re using the dry ones, which are what I use, you’re going to need to soak them in hot water 15 minutes and drained before plating. For those of you new to pho, the noodles are served in the bowl then the cooked chicken is added on top and the broth poured on after that. Once you’ve got that nice, steaming bowl of pho, you can reach for the various fixings (listed under accoutrement) and season to your taste.

To make the broth:
You’re going to char those yellow onions and that ginger. You can do that on the grill, on a gas stovetop with a pair of tongs or in your broiler. Basically, you want all that external skin to get nice and black and then you’re going to slap those onions and that ginger in zip-lock bags, a bag for each. Let them sweat for a few minutes and then rub the bags and watch the skin come right off! Once that’s done, slice the ginger into about eight pieces.

Fill a large stockpot with filtered water. Bring to a boil. While that’s heating up, section your chicken. Carve the meat off of the bone with a sharp knife. Carve the chicken breast meat off of the bone and reserve it for the soup (tutorial). Now, on a large stable cutting board, you’re going to want to whack into the rest of the chicken to get sections that measure about 3 inches or so. The reason for this is more exposed bone will result in more marrow and fuller flavor. You can also whack into the chicken necks and backs to get more marrow into the broth. Once the water is boiling add the chicken pieces and bone but NOT the breast, to the pot.

Now boil that chicken for exactly five minutes and then drain it into a colander that’s placed in your spotlessly clean sink. Why you say? This is said to remove impurities and without this step, you can get a gamey flavor. Once the chicken has boiled, strain the chicken parts and water into the colander, and then rinse under running water. Rub off any clinging residue. Quickly wash the stockpot clean. Return chicken parts to the pot. Add chicken breast to the pot, breast side up.

Now it’s Pho Time:
Refill with about 4 quarts of filtered water. Turn heat to high and bring to boil, then immediately turn heat to low. Add all remaining broth ingredients, all those spices, the sweated yellow onions, etcetera. Prop lid up so that steam can escape. After 15 minutes, remove the chicken breasts. When cooled, shred breasts with your fingers and set aside . With a large slotted spoon, skim the surface of any impurities in the broth. Skimming every 20 minutes will ensure a clear broth. Simmer a total of 1 to 1 ½ hours. Taste and adjust seasoning with more Hoisin sauce and or sugar.

Strain the broth through a metal colander and discard any solids. Add prepared noodles to each bowl. Add shredded chicken breast. Ladle broth on top and serve immediately. Have ingredients set at table so each person can add the various herbs and seasonings to their bowl.

Wine you say? Yes, believe it or not a nice Riesling, rosé or Saumur Blanc.