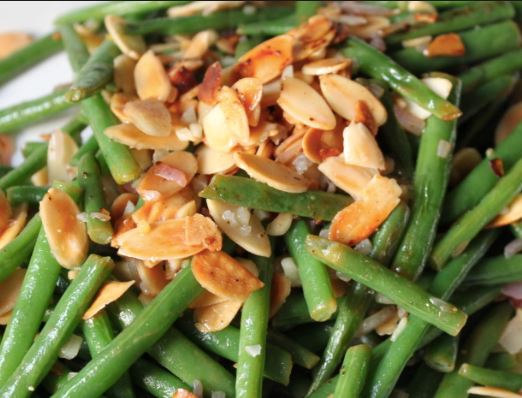 Want to shelve the green bean, mushroom soup and fried onion casserole this year? A little tired of that sweet potato and marshmallow thing but want something that will satisfy even the staunchest
Thanksgiving traditionalists in your family? In this 3 part/ one-a-day series, we’ll help elevate those Thanksgiving sides from tired and tried to simple and tasty or downright delish!

Go Green with the String Beans.
Forgo the canned stuff and roast fresh string beans in the oven with just a dab or olive oil and a sprinkle of kosher salt and pepper. All you have to do is trim and dry your string beans (any water diminishes the flavor). Once you’ve washed, dried and trimmed the string beans, toss them with some olive oil, salt and pepper and spread them out on a nonstick baking sheet and pop them in the oven at 425 degrees for 15-20 minutes. You’ll have to stir them once and yes, you can cook them alongside the turkey as long as there’s zero risk of drip-down and all that. Elevate this from ordinary to extraordinary with some slivered almonds you can toast on the stovetop with just a dab of peanut oil. Toss just before it hits the table and that’s just about divine. A dab of butter and dash of garlic salt won’t do you wrong here either.

Want to go fancier? Then sauté some Cremini and white button mushrooms with a little olive oil, minced garlic and some red bell pepper. Once the mushrooms are about halfway cooked down, lower the temp and stir in some fresh cream and some thickener like cornstarch in water. Once you stir in those roasted string beans, you can season to taste. I usually add a little more salt and cracked black pepper. Top with fried onions (Trader Joes has a nice brand) and voilà it’s basically the same dish but more refined and tastier too with less sodium. The Pioneer woman has a great, simple string bean recipe too.

The New York Times just published a great rundown of better side dishes and some of them look well worth trying. See here.

Until tomorrow when we dare to call that all-too-famous sweet potato marshmallow thing into question!