Blog   »   Is Your Love of Chocolate Hardwired? 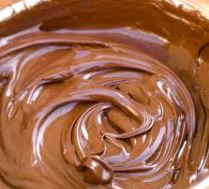 Are you a fellow chocolate lover? If you count chocolate as the sixth food group, I totally hear you and know this– You are not alone. In fact, in the U.S. as many as 8 in 10 persons are said to be chocolate eaters while 4 in 10 would call themselves “chocolate lovers” or “chocoholics.” Famous chocoholics include Beyoncé, Blake Lively, Katy Perry, Cher, Ariana Grande, Danielle Steel, Jim Carey, Anthony Bourdain, Ashton Kutcher and as the list suggests, females are at least slightly more prone to amator socolate (“love of the chocolate” Latin) than males.

So what did they find? At the sight of chocolate, cravers showed significant activity in the medial orbitofrontal cortex and ventral striatum. According to Wikipedia, medial orbitofrontal cortex is, “involved in making stimulus-reward associations and with the reinforcement of behavior” and interestingly enough, the ventral striatum is said to aid in advanced motor functions and “inhibiting one’s behavior” in social interactions. Eating the chocolate while looking at a picture of the chocolate spurned a “greater effect than the sum of the components” i.e. more than double of just looking at or just eating the chocolate.

Long story short, chocolate cravers show significantly more activity in the reward circuitry of the brain, the very same areas that light up to differing degrees in persons who are predisposed to alcoholism or drug addiction. Persons who have a greater “pleasure response” from drinking alcohol are genetically predisposed to become addicted to alcohol and the same is to be said with all drugs. Our brain really does have a storehouse of receptors, a veritable pharmacy that enables us to feel certain sensations. It also has a place for chocolate and some of us are predisposed to have that craving or drive for the stuff although “subjective” responses are also said to be at work too but just how much is subjective and how much is hardwired, well the science just hasn’t been done yet.

As for the chemical agents responsible for the pleasure response, the main culprit is said to be anandamide, a chemical already found within the human brain, dubbed the “feel-good chemical” (a variant called “anandamide THC” is the feel-good chemical in cannabis). And although it is not yet proven, eating chocolate is believed to make the natural anandamide found in the human brain persist for a longer period of time, yielding the “chocolate high” effect which explains to me why letting each little morsel slowly melt lets that feeling of wellbeing wash over me, one delicious bite at a time.

Until next time, Happy Eating!