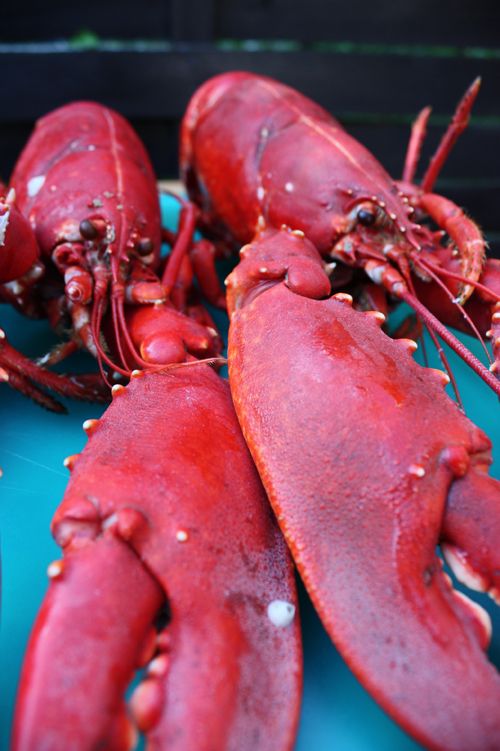 Cooking lobster at home can be difficult for many of us, since cooking lobster by tossing it live into a pot of boiling water is still the most commonly used and chef-sanctioned way of getting the job done.

So, first and foremost, I have to ask the question, “Is cooking live lobster necessary?”

Answer: It depends on who you ask.

While most notable chefs will say cooking the lobster live is the proper way to do it, others will say killing it quickly with a sharp knife is a better option, since less cortisol is released into the lobster’s tissue. The presence of cortisol in the creature’s tissue will toughen up the meat and therefore killing it humanely before cooking will yield sweeter meat that isn’t tough to chew.

The whole reason lobster is cooked live or just killed is because lobster can have harmful bacteria that aren’t destroyed by cooking in their flesh. When you cook the a live lobster the chance of food poisoning is minimized. Lobsters are bottom feeders and despite their highbrow status, they can carry more bacteria then a fish (this is true of all shellfish).

Hence, proper handing and preparation are important. Future chefs, wonder if you’ll be expected to kill lobsters? The answer is yes so learn how to do it well.
So there we have our answer: cooking live lobster isn’t positively necessary but cooking just killed lobster is.

The preferred way of killing a lobster is to do it with certainty and precision. You will need a very sharp knife. Pierce the head of the lobster, just behind the eyes, with a very sharp knife. After this you can drop it in the pot or section it out for broiling or for sautéing or stewing. 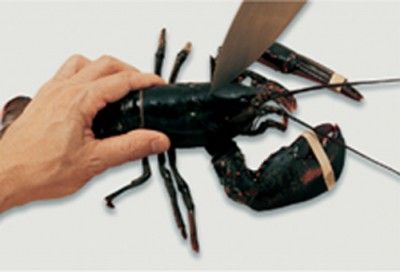 Some say putting lobster in a pot of cold water and gradually increasing the temperature will minimize pain. If anything this slows the process and, if lobsters do indeed feel pain, prolongs the process. Read up more about this here.

If you’re averse to using killing a live lobster with a sharp knife placing the lobster head first into the pot of boiling water should kill it instantly, preventing the meat from toughening.

A new exciting third option came to market in 2009. Costing about $3500, this microwave-looking device instantly kills lobster via electric shock. The Crustastun entry on Wikipedia says the device “renders the shellfish unconscious in 0.3 seconds and kills the animal in 5 to 10.”

Boiling lobster for too long will make the meat dry and tough. After the initial boil, simmer for 5-6 minutes per pound. Water or court bouillon may be used as the simmering liquid. Other cooking ideas include sautéing, baking, or broiling.

Just can’t bring yourself to prepare live lobster at home? Get some flash frozen lobster tails and make this recipe:

2. Heat the butter in a soup pot over medium heat. Add the lobster shells and all stirring occasionally until bright red, about 10-12 minutes.

4. Continue to cook until aroma is present, about 4 minutes.

6. Add brandy and stir well to deglaze the pan. Continue to cook until the brandy is cooked away. Sprinkle flour to make a roux. Continue to cook, stirring frequently for about 6-8 minutes more.

9. Strain the soup and return to pot.