Blog   »   How are You Going to Prepare the Thanksgiving Turkey this Year? The Pros and Cons of Brining, Frying and Roasting that Turkey. 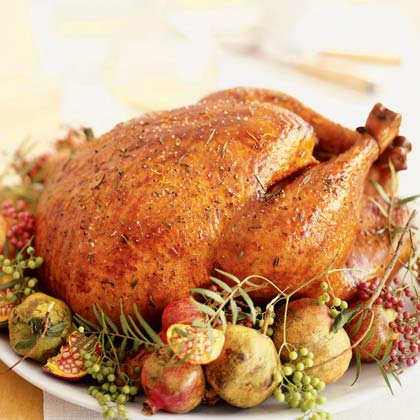 Brined turkey is all the rage this year and for good reason. When you brine what you’re actually doing is introducing more fluid into the myofibrils of the meat, allowing them to swell up to twice their original size. This results in a moister turkey and moist turkey is what it’s all about. In fact, brined birds soak up so much of the brine that they can weigh 10% more after the brining process than they did before it. Plus, when you cook a
brined turkey , the dissolved proteins do not coagulate or bind together. This results in a more bite-ably tender and moist meat.

If you brine your turkey you can then bake or roast it and get that perfectly browned bird the folks are expecting. A brined turkey can be roasted or baked according to a standard recipe. If you do this, you’ll want to cut down on the salt in the recipe by half, since there’s already salt in the meat and plan on reducing bake time to 2 or 3 minutes less per pound.

Why not to Brine.

It happens rarely but it does happen…

Some folks don’t like the taste or texture of brined turkey. My advice: don’t get uber-creative with your brine. Stick to the recipe and instructions and don’t over-brine. That can result in a mushy or rubbery texture. A salt water brine is best in my opinion. Plan on buttering that bird and basting it too.

Again it’s all about moisture. The idea with deep frying the turkey is that cooking it quickly in hot oil locks in all of the moisture that’s usually lost when you roast it. The cooking time is way, way shorter when you fry your turkey. A whole bird, depending on its size will take just 30-45 minutes to fry.

Crispy skin and tender meat is always a plus. I think the fried turkey calls for a more southern style Thanksgiving dinner so it might be fun to do cornbread stuffing, whisky glazed sweet potatoes, Brussels sprouts, mashed potatoes and a few buttermilks biscuits for good measure.
More info on frying your turkey.

Why not to Fry.

The whole fried turkey is more moist thing might not even be true! J. Kenji López-Alt of Serious Eats put fried turkey to the test a few years ago and found the turkey he fried had much less moisture than the roasted one. I’ve had fried turkey a few times and was pretty blown away by how moist the meat was. I’m a dark-meat lover so if the breasts came out as dry as López-Alt says they did, I probably wouldn’t have noticed. I do remember everyone around me raving about the fried turkey each time I’ve had it.

One drawback with doing fried is you’ve either got to go sans gravy (cause for mayhem is most families) or you’ve got to buy separate turkey bits from your butcher. This closer you get to the holiday, the harder time you’ll have finding those bits since everyone’s making gravy.

Another major drawback and one you should seriously consider is how dangerous deep frying a 17 pound bird can be. It’s really, really dangerous, I mean burn your house down dangerous! Seriously!!! So do your research and take every precaution you can, frying outside away from any grass, wood or anything remotely flammable and even if they say a big pot is fine, don’t do it! Go only with a well-made, tested turkey fryer. Even then, these things are dangerous. You’re going to need a reliable assistant or two. If you don’t have the manpower, don’t do it.
See Alton Brown’s recipe for brined and fried turkey here. Were I to do fried this year, this is the way I’d go.

Roasted or baked turkey is the most traditional way of making the holiday bird, so if your family members are sticklers for tradition, plan on roasting that bird. The one year my uncle did the fried turkey thing, I was the one in charge of roasting a smaller bird just to have that for the family members who’d want it done the traditional way. Though both roasting and baking are defined as “dry heat methods” the line isn’t so rigid. Adding a cup of broth to the pan is common practice as is tenting which, I believe, is a step away from strict adherence to the dry heat cooking method.

When you roast, you can fill the cavity of the turkey with celery, parsley, onion and a whole host of various aromatics that permeate and flavor the meat from the inside. You can baste your bird and roast it breast side down to result in a moister breast meat too. Gravy isn’t a problem when you roast either since you’ve got the pan drippings you’d be missing with a fried bird. Your stuffing will probably benefit too since you’ve got those drippings to wet the stuffing with.

Wondering why I say “roast” and not “bake”? Well, they’re loosely the same thing. The chefs I’ve worked with often use roast when they’re talking about baking at a higher temperature like 400 or 450 degrees. Another school of thought says baking refers to cakes and pastry and anything that’s unstructured and becomes solidified by baking in an oven. Roasting is the term of preference for preparation of meats, poultry and vegetables which have structure of their own. For instance, a custard is baked, a leg of lamb is roasted.

Why not to Roast.

I dunno. Maybe roast turkey is a bit too traditional some years. Maybe that recipe for Grandma’s Turkey was great a few years ago but now, every year you make it the turkey comes out dry. Birds are unpredictable. Sometimes the turkey you forgot about comes out better than the one you lovingly basted and coddled.

If you decide not to brine the bird this year be sure to salt it. Salting before baking helps lock in the moisture though it doesn’t work as well as brining does. Although I use kosher salt for just about everything, sea salt or table salt may work better for salting the turkey. Kosher salt’s flat platelet structure makes it less able to penetrate the surface of the skin and enter the meat. Table salt has iodine which isn’t great for the thyroid so sea salt, one with a nice smoky flavor is probably the way I’d go.

This year I’m doing a 12 hour saltwater brine and then I’m roasting in an oven heated to 450 degrees but turned down to 350 the minute the turkey is in the oven. The higher temperature will brown the breasts quickly and the lower temperature will help keep the meat moist. I’m also stuffing it full of aromatics and relying on some Kerrygold butter to make that skin extra delectable. I’ll be basting it regularly too, while prepping the rest of the fixings and sipping white wine.

Saveur–How to Roast the Perfect Turkey.