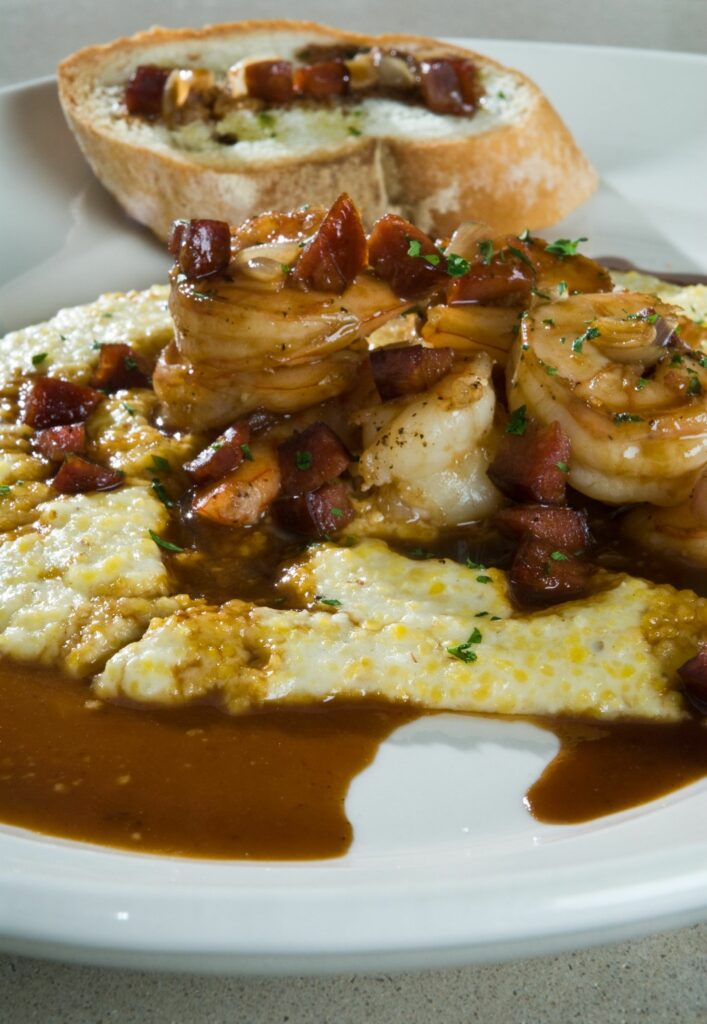 Southern food is just about as popular as Country Music. Yup, it’s everywhere. Sure you can say Southern cooking is all the rage because it hearkens back to a simpler time in American history but who’s buying that? Southern food is just dern good! Thankfully, in recent years, more and more chefs have started looking at the dishes they grew up eating and they’ve added to the tradition, improvising and reinventing as they go. Southern cooking isn’t all about the past, it’s plenty about the present too, as our #1 Southern Dish You’ve to Eat will tell you.

#1) Shrimp and Grits
Why? Cause it’s the darlin’ of so many of today’s hottest chefs. If you haven’t seen it on the menu of at least a couple of your favorite restaurants, you will soon. Creamy, sometimes cheesy grits are the backdrop for shrimp that are usually done grilled or sautéed in a scampi style.

Done right, the spice of the shrimp nearly cuts through the rounded, rich character of the grits. It’s got the appeal of downhome comfort but dresses up easily with carefully sourced ingredients and careful plating. Wondering about the origins of the dish? You don’t have to look too far back. The now iconic Southern dish was most probably invented by the late chef Bill Neal of Crook’s Corner in Charleston, South Carolina just a few decades ago. Since then, it’s been named an American Classic by none other than the James Beard Foundation. Even non-Southern chefs like Bobby Flay have gotten in on the action, pitting his rendition of the dish against Georgia’s unofficial master of the dish, a mister Joe Barnett. Alas, this time Flay did not emerge victorious.

#2) Jambalaya
Why you say? Because it’s a very tasty, historical dish that’s different than just about anything you’ll find anywhere else in the world. In fact, it’s closest non-American relative may be Senegalese (check out what Sean Brock has been learning about the African origins of Southern American food). Besides it being a dish that really evokes the feel and temperament of the Cajun country, Jambalaya is pretty dern easy to make with plenty of show-stopping appeal. My favorite version of the dish has lots of Andouille sausage and shrimp (Emeril Lagasse’s recipe is a good one). I break with when it comes to hot sauce. In lieu of Tabasco or red pepper, I go with Sriracha for it’s clean, quick spice.

Wondering what the difference is between Jambalaya, Gumbo, Étouffée and Purloo? Jambalaya and Purloo are all-in-one dishes, meaning the rice cooks in the broth with all of the other ingredients. Gumbo and Étouffée are made with a roux and because of this, they’re much more time-intensive. Lighter roux accompanies most Étouffées while a darker roux and more spice are characteristic of a Gumbo. Natives of New Orleans and the Mississippi with often tell you, you’ve got to add okra for it to be a real Gumbo.

#3) Chicken and Dumplings
Why? Because a good pot of chicken and dumplings is just about the most comforting thing on the planet. Something about the doughy, slimy (yes) and totally bitable appeal of the dumplings in an uncomplicated roux just works in so many ways over-hyped, over-thought dishes do not. Gladly, this dish can retain it’s comforting goodness even when you lighten it up a bit, opting for less flour in the broth and use less butter.

#4) Texas Red Beef Short Ribs
Even if you’re a devotee of Carolina-style barbeque, everyone who cooks could use a little red sauce magic found in a well-executed Texan short rib. And despite how barbecue-centric we are in the U.S. there’s actually lots of untapped potential to be found in the ancho and pasilla chilies, tomato and (oftentimes) chocolate combo that makes up any self-respecting red sauce. Whether you want to have the family over for Sunday barbeque or are planning the late winter menu at a three star restaurant, short ribs can go as highbrow or downhome as you want.
Going for three stars? Make separate reductions or toast and emulsify the ancho and pasillas separately, then do a dark chocolate sauce and fresh tomato/garlic sauce, and plate the ribs with all four. If straight up on-the-grill barbeque isn’t for you, you can make excellent Texan style short ribs in a crock pot of even do them sous-vide. Lathered with sauce, then covered and braised for 2 hours at 325 will get you falling-off-the-bone good. Or, just stay true to tradition and salt the dern ribs, toss them on the grill and lather them up with sauce the moment they’re done.

#5) Hoppin’ John
Why? Cause they’ll bring you good luck! That’s right! There’s a tradition that says eating Hoppin’ John on New Year’s Day will bring you good luck. Some places will serve it alongside collard greens, said to bring you more of the other green stuff too. Besides being lucky, you can whip up Hoppin’ John just a fast as you can make beans and rice. The 20th century version of the dish consists of nothing more than rice, homemade black eyed peas, bacon and green onions. In these Slow food times, chefs have reinterpreted the dish by using a panoply of grains and different cuts of pork. The aforementioned Sean Brock looked to the history of Hoppin’ John and makes one truer to it’s earlier incarnations: made of Carolina Gold Rice and Sea Island Red Peas. Both of the dish’s original main ingredients were lost to storm and/or the move toward mass monoculture agriculture of the 1930s. In any case, here’s a dish that’s fun and easy to make in a jiff and it’s flexible too. Whatever you do, do yourself the favor of using fresh or at the very least, dried beans. Canned beans will mask the natural, earthy goodness of Hoppin’ John. Feeling like a good, hearty breakfast? Whip up some Hoppin’ John and toss a poached egg on top and you’ll know you’re one lucky cook.

Are there more Southern Dishes you need to try? Of course! Chili,
cornbread Hot Chicken (the Nashville favorite) and a really good pot of collard greens are just a few that come to mind but these five should instill a love of Southern food in even the most diehard Yankee!