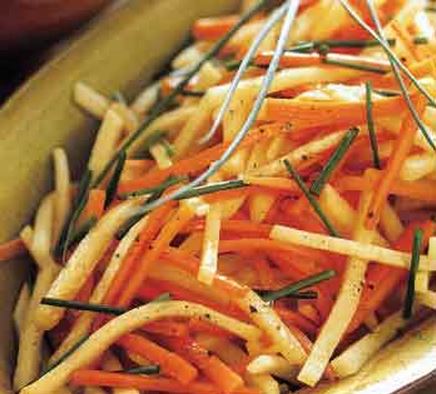 Want a few healthy dishes on the table this time of year? Added to the holiday table, this very tasty, never-boring dish offsets the more elaborate and heavy fare. It’s loaded with vitamin C, vitamin A and cancer-fighting anti-oxidants too! It always gets rave reviews so if you want to get ’em eating their veggies this is a definite must!

Don’t quite know what a rutabaga is, you’re not alone! Rutabagas are said to be a cross between a turnip and a cabbage. This sometimes very large root vegetable probably originated in Sweden with crops being noted there as early as 1620 (on Wikipedia). It’s still referred to as a “new vegetable” but that’s all relative now isn’t it?

Purchase the carrots that are still crispy hard and which have a deep orange hue. The rutabagas you select (also called Swiss Turnips or Russian Turnips) should be no bigger than two fists put together. The smaller ones, usually about the size of one fist, tend to be sweeter. FYI, rutabagas are also fantastic roasted.

3. Add vegetables and cook until glazed, stirring occasionally, about 6 minutes. Season to taste with salt and pepper. Remove from heat. Mix in fresh chives.