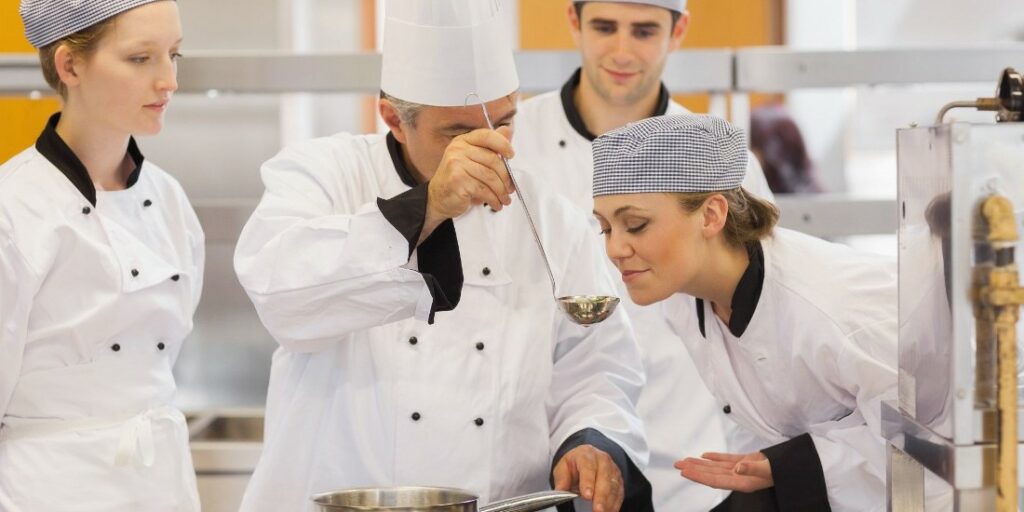 It can seem like a glamorous–and lucrative–career choice: Big Name Chef. A celebrity chef that has their own cooking show, a chef de cuisine that heads up the most trendy restaurants in the biggest cities, or a private chef to the stars. The undeniable pull of a fast-paced and highly-rewarding job has made for a competitive field for hopefuls. But how much is culinary school and is it worth it?

A worldwide pandemic didn’t help matters, either. As cooking jobs dried up after restaurants closed during Covid, many cooking schools followed suit. But fewer opportunities for culinary education and available jobs after completing a degree program didn’t necessarily stem the tide of those pursuing a culinary career.

However, starting a career in the culinary industry, even with a four-year bachelor’s degree, is notoriously low paying. It’s definitely a labor of love at the start, with low pay and overall instability of independent and start-up restaurants. If you are considering a career in the business, you may be wondering how much is culinary school to attend. 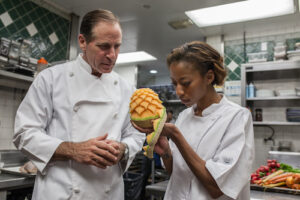 The bulk of your culinary school costs will come from tuition. Like most universities, community colleges, or trade schools, programs are split into semesters. Depending on your field of study, you may need anywhere from four to eight semesters to finish a program or degree.

For example, the Culinary Institute of America (CIA) charges anywhere between $20,000 to $60,000 ($4,000 to $12,000 per semester, five semesters in total to finish a given program). There are also residency tuitions, wine and beverage fees, and even a graduation fee. Their Master’s programs will approach or surpass $45,000.

Additional costs to consider when figuring out how much is culinary school the supplies needed for a course. There will be textbooks and other learning materials of course–that’s true of any major or discipline. But you’ll also want to acquire your own uniform as well as utensils, especially knives.

These are (hopefully) one-time costs, but can reach a couple of thousand dollars depending on the requirements. Some schools may also require room or board to attend, which will be additional charges as well. It’s important to think about ALL costs when figuring out how much culinary school costs.

How Much is Culinary School? Location Matters

Depending on where you go to culinary school, the typical costs could be so much more. In general, places like Los Angeles, New York, San Diego, etc. are going to be more expensive than most other cities in the country. If nothing else, those costs eventually trickle down to the supplies needed for culinary school.

Not to mention the cost to move to a bigger city to attend a “name” university. Although those costs aren’t reflected in tuition (unless out-of-state increases are applied), they have to be a consideration when deciding on which culinary school you’d like to attend.

Let’s say you wanted to attend Le Cordon Bleu in Paris. Tuition is one thing, paying for room and board, travel expenses, and living abroad for the amount of time it takes to finish a program can be very cost prohibitive. Not to mention the chances of finding work to help pay some of those costs.

However, if you’re able to attend a culinary school where you currently live, that will certainly help with the financial decision. If learning how to cook is more important than picking up a degree in culinary arts from a well-known school, there are options available to you.

Manage the Costs of Culinary School

The Chef Apprentice School of the Arts (CASA) was born from the belief that culinary schools should be more accessible, both in cost and availability. Instead of having one or two locations with limited enrollment, we have opportunities all over the country to learn the culinary arts from a working professional.

You’ll learn one-on-one with a chef in their kitchen, get immediate feedback to your questions, and be given dishes to work on at home. Our Gourmet Chef Program concludes with 20 hours in a working kitchen, taking your place in the line or at your station, side by side with those already making a living in the kitchen.

This kind of immersive environment just isn’t available in most other certificate programs. You’ll see how a kitchen operates in the real world, learning the cadence of professionals instead of other students. This is the experience that will help you find a job, either with your mentor or through his recommendation.

For less than $14,000 (and opportunities for financial aid if applicable), you’ll have exclusive access to a pro, learn the different stations of the kitchen, how a brigade system works, and a solid foundation on how to prepare cuisines from around the world. See how the sous chef operates with the rest of the staff under the watchful eye of the head chef.

In other institutions, that may barely cover a single semester of tuition. Additionally, university education requires prerequisites that you may not be interested in, costing you more time and money. CASA will work with you to build a curriculum around what you want to learn.

And you’ll be finished in six months or less. Whether you want to be a chef, interested in gourmet baking, a pastry chef, or even a restauranteur, CASA will cost you less while you learn more. And you’ll be making connections with those that can help you find a job when you’ve completed the program.