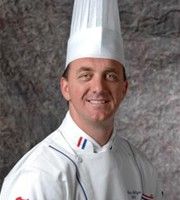 Chef Martin “Marty” Gilligan discovered his passion for cooking while working in the kitchen of his father’s restaurant, Gilligan’s Saloon in the Hamptons, New York. During this period, Gilligan honed his skills and gained valuable insights into how the culinary industry operates. Gilligan went on to graduate, with honors, from the Culinary Institute of America.Chef Gilligan has shared his more than 20 years of experience and culinary expertise as an instructor in culinary arts and food service management at Los Angeles Mission College. He has also taught at Le Cordon Bleu and the Art Institute and has and been a guest chef and consultant at Johnson and Wales University. With tenure at the Four Seasons Hotel, in both California and New York, and a career that has given him the distinction of cooking for four United States Presidents, Chef Gilligan continues to enjoy a deeply rewarding and satisfying career. Gilligan has also been profiled on KCAL9 and Fox Television’s “Career Day” on Good Day L.A.

Whether you worked for the most influential chef in the middle of the twentieth century, Fernand Point, at La Pyramide, in Vienne, France or as chef at the Waldorf Astoria or The Plaza in New York during the early 1900s, or if you got in on the frontlines of nouvelle cuisine at Alice Waters’ restaurant, […]